Alaska Redistricting Board - The Five Board Members

The five Alaska Redistricting Board members are chosen by the Governor (2),  Senate President (1), House Chair (1), and the Chief Justice of the Alaska Supreme Court (1).

Since the meetings have been available by audio only so far, I haven't had a chance to see or talk to individual Board members.  So I'm giving you some brief overviews of the Board members based on information  available online.

"Gov. Mike Dunleavy appointed two members of the powerful board that will draw new boundaries for legislative districts.

"Bethany Marcum of Anchorage and E. Budd Simpson of Juneau are the first of five new members to be named to the board. Marcum was an aide to Dunleavy when he was a state senator. She is the executive director of the Alaska Policy Forum, a conservative think tank. Simpson is a lawyer who has served as outside counsel to the Sealaska Corporation."

Bethany Marcum is the Chief Executive Officer at Alaska Policy Forum. In this role, she directs the policy priorities and strategic initiatives of the organization. By educating the public and elected officials on Alaskan issues, Bethany works to maximize individual opportunities and freedom for all Alaskans. When she's not at work, Bethany spends her time going on hunting trips all over the country and around the world."

From a State Policy Network interview with Bethany Marcum.

"In this interview, we chat with Alaska Policy Forum‘s executive director, Bethany Marcum. Prior to joining the Forum, Bethany worked for the Alaska state legislature. Her involvement with the Forum started as a donor and occasional volunteer, then as a part-time writer, and eventually she joined the organization as a full-time team member.

Here are her insights on advancing freedom in America’s “last frontier”:

SPN: How did you first get involved in the freedom movement?

Bethany: I was about as non-political and non-informed as a person can be for most of my life. Exasperation about the 2008 bailouts brought me into the Tea Party movement and from there I gradually found my way to the policy world after seeing that rallies could not accomplish the change I wished to see.

SPN: Was there a moment or a role model that inspired you to choose work that’s dedicated to the cause of freedom and human flourishing?

Bethany: While there was a long delay before I took action, I can remember a moment around 1986. I was a small-town Midwest country girl who was in “the big city” of Boston for a few months, and I found a copy of Reason magazine on the subway.  As I thumbed through it, I thought, “Wow, there are actually people out there who think like I do. Sure didn’t know that!” And that was the end of that for over 20 years. Flash forward to my wake-up in the Tea Party movement in 2009 when I saw a copy of Reason magazine at an event. My first thought: “Holy moly, those people are still at it. And now I’m one of them!”

As a way to get a sense of her values, here the mission and principles of APF,  the organization she heads:

Our mission is to empower and educate Alaskans and policymakers by promoting policies that grow freedom for all. E. Budd Simpson devotes a large portion of his practice to serving as the principal outside legal counsel to Sealaska Corporation (one of the twelve Alaska Native regional corporations formed under the Alaska Native Claims Settlement Act), which has been a client of his since 1978. Mr. Simpson's practice includes the timber, banking, resource development, real estate, subsurface, risk management, personnel, state securities regulations, and litigation activities of the corporation.

He is also General Counsel for The Juneau Empire, the region's largest daily newspaper, and its parent company, Morris Communications Corporation, which has media holdings throughout the state and the Lower 48.

Martindale-Hubbell awarded Mr. Simpson its highest rating, AV. He is a member of the Alaska Bar Disciplinary Board and chairs the Alaska Bar Fee Arbitration Panel in the First Judicial District. He is a former President and served on the Executive Board of the Southeast Alaska Area Council of the Boy Scouts of America from 1985 to 2005. He served as a member of the Alaska State Physical Therapy Board for six years, and was a director of the Port of Juneau, Docks and Harbors Board, from 1996 to 2008, including two terms as Chair."

John Binkley, Fairbanks - Chair of the Alaska Redistricting Board.

"John Emerson "Johne" Binkley (born February 4, 1953 in Fairbanks, Alaska)[1] is a riverboat pilot, businessman and Republican politician from the U.S. state of Alaska. Binkley served for one term apiece in the Alaska House of Representatives and the Alaska Senate during the mid and late 1980s, but is perhaps better known for his candidacy for governor of Alaska in the 2006 primary election. In that election, he finished far behind Sarah Palin (who would go on to win the governorship), but also far ahead of one-term incumbent governor Frank Murkowski, by then deeply unpopular amongst Alaskans.

In 2017, the Anchorage Daily News was acquired by Binkley Co., a group run by John's son, Ryan Binkley. [2]

Binkley was elected chair of the non-partisan Alaska Redistricting Board in 2020, following his appointment to the five-member board by Senate President Cathy Giessel."

"Alaska Speaker of the House Bryce Edgmon, I-Dillingham,    has named Alaska
Federation of Natives attorney Nicole Borromeo to the board in charge of redrawing the state’s House and Senate districts after the 2020 census."   (From ADN)

"Nicole Borromeo serves the Executive Vice President and General Counsel for the Alaska Federation of Natives, the oldest and largest Native organization in Alaska. In addition to providing executive level leadership, Ms. Borromeo advises AFN’s Board and President on a wide array of Alaska Native legislative and litigation matters, including civil and voting rights.

Ms. Borromeo’s volunteer civic engagement includes participation on the U.S. Department of Energy’s Indian Country Energy and Infrastructure Workgroup, to which she was appointed in 2017. Additionally, she is a Founding Board Member of Justice Not Politics Alaska, a nonpartisan organization promoting the independence of Alaska’s judiciary.

Since 2008, Ms. Borromeo has also served as a mentor to girls, young women, and minorities of all ages who are considering legal and judicial careers through the Color of Justice Program. 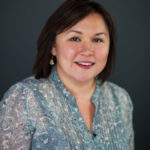 "Alaska Chief Justice Joel Bolger has picked Melanie Bahnke of Nome for the final seat on the board that will redraw Alaska’s election boundaries following the 2020 census. Bahnke is the president and CEO of regional nonprofit Kawerak Inc. and is an Alaska Federation of Natives board member.

"Melanie is the President and CEO of Kawerak, Inc. and has been employed by Kawerak since 1999. In 2012 she was promoted to the President position. She holds a Master of Arts degree in Rural Development from the University of Alaska Fairbanks, and a Bachelor of Education degree in Elementary Education from the University of Alaska Anchorage. Melanie is a tribal member of the Native Village of Savoonga and speaks St. Lawrence Island Yupik as her first language. She is married to Kevin Bahnke, and they have three children."