First Anchorage Election Totals Have Dunbar Ahead By 114 Votes Out of 72,036 -UPDATE 3 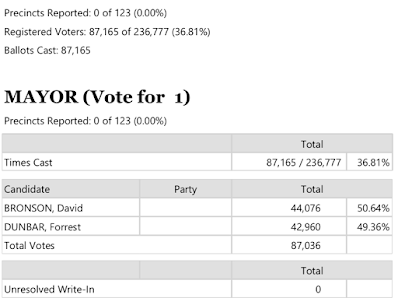 I suspect later analysis will show that Bronson had much more enthusiastic supporters - they were angry about how COVID restrictions affected their businesses and their sense of liberty. And many of them believe or pretend to believe that the presidential election was stolen.  Dunbar's supporters were split among three candidates and were mostly motivated by fear of Bronson winning - a fear they apparently didn't feel too strongly.

I would guess that national GOP supporters did a better job of targeting their voters via social media and other forms of communications than Dunbar was able to do.  But that's just speculation.

UPDATE 2:  Thursday May 13, 2021 - The tallies are following the pattern of the original election.  Each new report increases Bronson's lead.   It's now 627.  Of course, I exaggerate a bit since there have only been a total of three reports.  But it's not looking good.  Add your own favorite profanity.[ 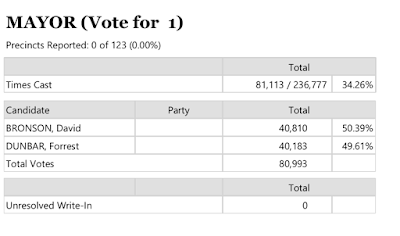 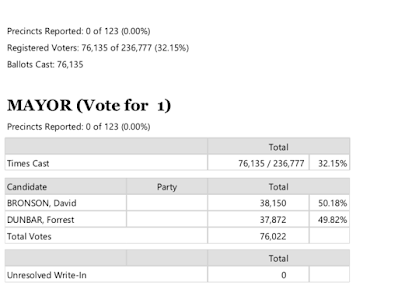 But out of 3,986 votes counted since yesterday, Bronson got 55% and Dunbar got 45%.  That's quite a difference.  I don't know which votes were counted today.

But in the general election, Dunbar led the first two or three results, then Bronson went ahead and his lead kept increasing.  That's not a good sign.

How many votes are left?  Not sure.  if we speculate about the same as came in today (I'll round up to 4000 to make it easier to calculate), Dunbar would need to get 55% of the votes just to break even with Bronson.

The odds aren't good.  The only positive I foresee if Bronson wins is that the Assembly will fight him all the way.  But there's still a lot of damage he can do. ]

People said the vote would be close, but I believed that Anchorage had moved further along than this, than half the voters voting for a pandemic denier, a virulent pro-lifer who has been equally opposed to LGBTQ rights. 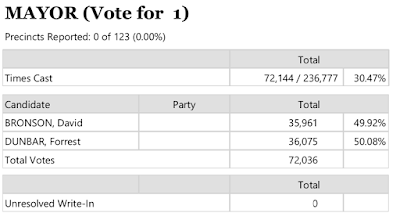 These are the results as of 8:15pm.  There haven't been any updates since then, so  that's probably it for tonight.  I'm guessing these are all the mail in ballots that arrived by yesterday or this morning.  Maybe people who voted in person before today.  So people who voted today in person or by mail are probably not counted.

There are more votes to come in during the next week - mail in votes that were post marked by today. Maybe people who voted in person today.  I'd like to think that the anti-masker crowd got all its voters out and the progressive folks just couldn't believe it could be this close.  But that's probably wishful thinking.

Unless the first mail-in votes depart radically from the trend so far, it looks like we aren't going to know who our next mayor is for at least ten more days.  And if it stays this close, there will be an automatic recount.

For the visually impaired whose devices can't read the image, Dunbar is ahead by 114 votes:

72,144/236,777 - These numbers are listed as "Times Cast" which has never been an obvious descriptor.  It also says 30.47%.  I understand this to mean the number of votes over the number of registered voters.  If that's correct, then 69% of Anchorage voters did not vote.  (Well, we probably have a few thousand more votes coming in.)

But it also raises the question of the 108 difference between this number (72,144) and the number of votes listed if you add Dunbar and Bronson's votes.  Are those write-ins?  There's a line that says "Unresolved Write-ins = 0".  I'm guessing they mean they've resolved all the write ins.

Anchorage, I'm ashamed it's this close.  Ashamed that so many people voted for Bronson, ashamed for all the people who didn't vote.  I had thought people had learned from Trump and Dunleavy, but I am obviously wrong.