Misleading Headlines: "In A Divided City . . .'

Most of the headlines in the Anchorage Daily News today are relatively straightforward, probably accurate descriptions. 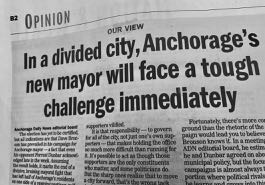 There may be more lurking in this headline than I see, but it seems fairly accurate.

But let's look at the headline on the ADN's editorial about the election:

"In a divided city, Anchorge's new mayor will face a tough challenge immediately"

My focus is on "in a divided city."   Sure, there has been an obvious division between at the moment between maskers and non-maskers, between those who put failing businesses ahead of people dying.  But I would note there are also lots of other divisions - racial, financial, educational, religious, for example - that have existed and will continue to exist.  But those aren't what the ADN seems focused on.  They're talking about politically divided.

This is amplified further on in the editorial.

"[the election] has left half of Anchorage's residents on one side of a yawning partisan gulf, and the remainder on the other side."

The people who voted - less than 40% of registered voters - are evenly split.  But the ADN editorial board has cited no polls or other evidence to show that those who did NOT vote are so evenly divided.  I don't think they are.  We have had a segment of our population that has been loud and righteous in opposing things like women's rights to choose to handle unwanted pregnancies and LGBTQ rights.  But that doesn't represent the majority of Anchorage residents as our generally progressive Assembly (city council) demonstrates.

But it's careless to assume we are evenly split.  It mirrors the false impression that our Senate is evenly split, when in reality enough small population states that are Republican disproportionately skew the Senate to the right.

"But, according to the calculation of Ian Millhiser, writing for Vox, if you add up the population of states and assign half to each of their two senators, “the Democratic half of the Senate represents 41,549,808 more people than the Republican half.”  From MinnPost

Of course, that claim is also misleading because not all the people the Democratic Senators represent are all Democrats either. But then, neither are the constituents of the Republican Senators all Republicans.

The ADN editorial board does make this point in reminding our likely new mayor, Dave Bronson, that he represents not just his supporters, but also those who didn't support him.  But then further contradicting the Divided City of the headline, they write:

"Fortunately, there's more common ground than the rhetoric of the campaign would lead you to believe, and Bronson knows it.  In meeting with the ADN editorial board, he estimated that he and Dunbar agreed on about 89% of municipal policy. . ."

So we aren't so divided after all?  But conflict draws eyeballs and sells newspapers.

The real concern I have is between those who take it upon themselves to use intimidation and defiance of the law to make their points and to get their  way.  Only the delusional believe still that Trump was cheated out of the the presidency, yet the Republican Party supports that lie in refusing to refute it and in expelling Lynn Cheney for saying those words out lout.  While not censuring representatives who helped the rioters and continue to repeat the lies about the election.