When Is A Crossroad Just A Copied Fork In The Road Dishonestly Promoted?

With mail in voting, there really is no such thing as election day any more.  It's an election period with a deadline.  And so we're in that period in Anchorage in mayoral runoff.  If we had ranked choice voting, it would have all been over at the end of the original election.

In any case, I got this flyer (among many others) the other day. 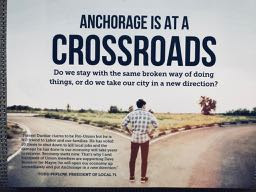 Cross roads, I thought.  When roads cross.  Like an intersection.  But this is really a fork in the road. One road becomes two.  No roads cross.  But, no matter.  Truth, accuracy, literacy all those things have been abandoned by about 30% of the public.  A crossroads - "a" before "crossroads" is a bit like a fingernail on a blackboard to me - is whatever Dave Bronson wants it to be.
There was also a bit deja vu.  I'd seen this picture before.  And it took less than a minute to pull it up via google.

This is John Kasich making the same point when he opposed Donald Trump.  Recycling old campaign ads is an old political habit.

And then I read the ad from Bronson.  Sorry, the resolution is probably too low for people to read it. It's a quote ranting against Forrest Dunbar, Bronson's opponent signed by "Todd Peplow, President of Local 71."

That seemed odd.  Why would a public employee union be supporting a candidate who has promised to cut every department except police?  I even considered calling the union to ask.  But lots of things were already on my mental to do list.

A clarification is made. The mailer from Bronson falsely claims Local 71 supports him.

As you do anything is how you do everything. Mr Bronson fails to be honest in his dealings.
https://t.co/DwRN5687Ks

The link goes to a letter from Jordan A. Adams, Business Manager/Secretary-Treasurer, Local 71 the union.  In part, it says:

"Today, I find myself in the unfortunate position of informing you that your recent mailer quoting Todd Peplow constituted an unauthorized and invalid endorsement, which must be corrected. To be clear: Public Employees Local 71 has not endorsed your candidacy, and I must correct this misinformation publicly.

In utilizing his official title and purporting to speak for “hundreds of union members,” Mr. Peplow has violated our LIUNA Constitution, longstanding protocols for candidate discussions, accepted procedures, and the expressed direction of both our Executive Board and General Membership provided to him following extensive debate on 13 March 2021 and 17 April 2021."

It's a long letter that says they don't go out looking for candidates, but if candidates come to them, they will review their platforms and make decisions about donations and endorsements and that Bronson never came to them.

One might give Bronson the benefit of the doubt here.  After all, the president of the union gave him the endorsement.  Shouldn't that be good enough?  This is a problem for the union, not the candidate. Part of me says, 'yeah, that's plausible.'

But, reading the letter again, I don't think so.

"Unfortunately, the only arguments Mr. Peplow has brought to our membership to deny Mr. Dunbar support have been based on his personal non-union issues related to lifestyle and actions of Mr. Dunbar’s family.  Had he made enough of a case to support your candidacy, our membership would have taken action to do so a mere two weeks prior to Mr. Peplow acting on his own and disregarding our members direction that they approve all endorsements."

This sure sounds like Peplow did try to get the union to endorse Bronson and the union turned him down.  I'd be surprised if Bronson didn't know that was going on.  And then when Peplow failed to get the endorsement for Bronson, he just went rogue and said, "I'll just put my name on it.  What is anyone going to do about?"

And, if something like that happened, he wouldn't be wrong.  There's really no serious penalties for violating the Alaska Public Offices Commission rules.  A $10,000 fine would be unusual, but it's like an ad buy for some candidates.  Part of the cost of the election.

If Bronson is elected mayor of Anchorage, we're screwed.  We got Trump nationally.  We got Dunleavy for the state, and now there's Bronson hoping to be mayor.  His greatest claims to fame in the public arena are fighting gay rights, fighting women's right to choose what they do with their own bodies, and fighting efforts to minimize the impact of COVID-19.